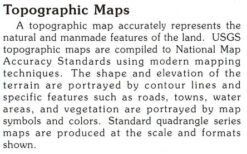 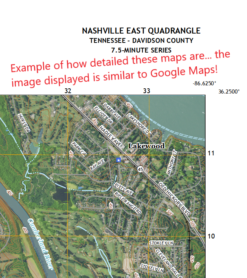 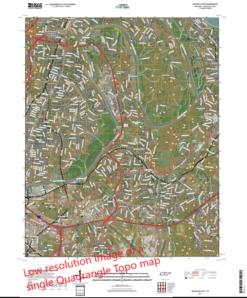 There are 805 separate USGS 7.5 Minute Topographic maps covering the state of TN. Each of these 805 maps is depicted as a QUADRANGLE on the TN state image to the left.  You will need to ZOOM to clearly view the names of the available 805 quadrangles.

Keep scrolling for more information about Topo maps and the ordering process.

Topographic maps, also called “Topos”, are a favorite of hikers and fellow outdoor enthusiasts due to their high level of detail that accurately represents the natural and manmade features of the land.  Topos compiled by the United States Geological Survey (USGS) use modern mapping techniques to display the shape and elevation of the terrain as portrayed by CONTOUR LINES.  Additionally, map SYMBOLS and COLORS identify specific features such as roads, towns, water areas and vegetation.

There are 805 separate USGS topographic maps covering the state of TN.  Each square, called a QUADRANGLE, is denoted by the name appearing in capital letters slanted across the quadrangle.  Choose your quadrangles by zooming in on the above TN Index image.  If the image is slow to load, or of inferior readability, you may access the TN Index directly from the USGS site here: https://store.usgs.gov/assets/MOD/StoreFiles/zoom/PDF/TN.pdf.

For each of the 805 quadrangles, there are 3 different versions available:
1.) Historic – these topo maps were originally published as paper documents in the period 1884-2006.  They include the ground features identified by cartographers and surveyors who walked the land as part of the map-making process. These maps are considered “original” and sometimes referred to as the “Old School” version.
2.) Current – these topo maps are created from digital Geographic Information System (GIS) databases, and are branded “US Topo” by the USGS
3.) Current w/Satellite – also created from GIS databases but include a photographic satellite overlay of the area.  Users consider this version very similar to the Google Earth maps that include satellite imagery.

– Item ships anywhere in the US for $10 S/H, rolled in a secure shipping tube or $5 S/H if folded in an envelope.

NOTE: If multiple quadrangles are ordered, we will contact you to advise you of reduced shipping costs available.  Please be sure to include your e-mail and/or phone number during the check-out process.

There are no reviews yet. 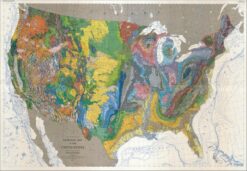